Note: The full version of this game is currently in development. The purpose of this page is to allow players to test core mechanics and provide feedback. This may not reflect the final state of the game. Things will constantly change, and right now this little more than a prototype.

Use your command over fast-growing vegetation to catapult yourself to insane heights in this first-person action platformer inspired by speedrunning strategies. Build up momentum, shoot the targets, and finish the course as quickly as you can.

this game seems so fun but there is a problem the whole time so i cant download it. and if i click on download i can chose where to put it but i cant select the first thing,

Why can't I play it on mac

Thankyou for the feedback!! I'm aware of this bug and I have fixed it, but the fix hasn't yet been released.

So glad you had fun, and I really appreciate the comment. <3

This game is so amazing! I just wanted to say that when you vault a rock, there is a bunch of screen shake so maybe try to fix that or have a setting to remove screen shake. Besides that though the game is perfect!

This is amazing! I don't have much constructive feedback- but I really enjoyed the prototype and can't wait for the full game!

I propose a system that sets you back to the last solid ground that you stood on. alternatively you could just bump the number of checkpoints up a bit

Also I was struggleing with the wallrun a bit, it just felt slightly clunky

Thanks for your feedback!

I don't think it's necessarily the checkpoint system that's the issue - I think it's just the difficulty ramp of this prototype is WAY off because I obviously have played this game a lot throughout development so I overestimate what beginners are able to do.

I did think about the system you described, but the issue is that a lot of players will bounce around on the saplings instead of actually touching solid ground. It might be worth looking into though.

The wallrun has been a major focus in the last few weeks of development. I'm going to change the way that the islands are shaped so that it's more clear what you can wallrun and what you can't. But if you can give more details about how it feels clunky, I'd really appreciate it!

After reading your reply I also realised that it definetely is the difficulty that made it annoying for me. The game definitely needs a more elaborate tutorial as the sapling mechanic is pretty unique.

So in order to give more feedback on wallrunning I played the game a bit further as I had not beaten the second level before posting my initial comment.  I love the grappling hook though there were a few tutorial messages that I didnt pay attention to as i was still in the process of learning the grappling hook and playing around with it.  That may just be my horrible attention span but I thought that some of the tutorial messages were popping up too quickly.

So my issues with the wallrun were resolved as I realised that I had just misunderstood it. I thought that you had to constantly hold spacebar but then in the third level I realised that that was not the case. Again I feel like there needs to be more space to just play around with the wallrun, so that new players can figure it out more easily as in the current introduction to it you have to hit kind of a hard jump in order to even test the wallrun out.

It's Karlson but nature ._.

Karlson was not the first of its kind in this genre. It's like calling super meat boy, Mario, but meat.

great game im speedrunning it and the mechanics are rlly good

Add a system to change keybinds

And also and a melee or a sniper

Keybind system will come eventually - but it is not a priority as the key purpose of this stage is to build up the main gameplay loop, not fuck around with adding settings etc.

Melee already exists - it's a momentum-based system wherein the damage you deal to an enemy is based on how fast you're going when you collide with them.

I don't believe a sniper would be appropriate for this game - this game is about going fast, and I think a sniper would encourage people to slow down and eliminate enemies from a distance which is not in the spirit of the game. 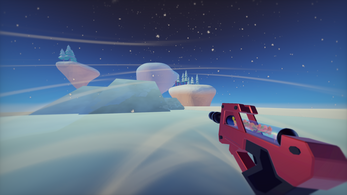 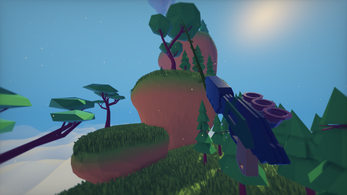